Polarity testing and Insertion Loss (IL) testing are crucial steps in the production and assessment of multi-stranded fiber optic cables. With certain setups, IL can be measured while verifying polarity.

The IL test measures the amount of light lost when traveling through the DUT en route to the detector. A test setup that uses a multichannel source and multichannel power meter evaluates the light paths of a multifiber device under test (DUT) one at a time. If any of the fibers are crossed or broken, light does not reach the OPM on the expected channel resulting in dark values. Using an Insertion Loss and Return Loss (RL) meter as the source instrument and a multichannel power meter as the detector allows for 3-in-1 IL, RL, and polarity evaluation.

See the following table for a full list of equipment options for creating an IL, RL, and polarity test setup. This application note focuses on the multichannel OP940 and the OP710 for testing multimode 50um MPO assemblies. Figures 1 and 2 show the launch and receive cables used with this equipment. The launch reference cable is a standard high performance (HPR) fanout cable with a type A mapping and 50um fiber. In order to route each fiber of the MPO to individual power meters, a fanout receive cable is needed as well. A “large core” receive cable, 62.5um in this case, acts as a “zero” loss connection. One could use a 50um receive cable here as well, but sometimes the additional loss causes referencing errors that could lead to negative IL values (gain measurements).

The RL reference is performed by leaving the HPR launch cable open to air. This allows the OP940 to find the location of the DUT.

Figure 1: Return Loss reference setup. The launch and receive cables are disconnected and the launch cable connector is open to air.

The IL reference is performed by mating the HPR launch cable to the large core receive cable using a type A mating adapter. This adapter creates a key-up to key-down connection and maintains a one-to-one polarity.

Figure 2: Insertion Loss reference setup. The launch and receive cables are connected using a Type A (key up to key down) mating adapter.

The IL reference process measures power on each channel independently using the OP710. This independent measurement does not allow an incorrectly routed DUT to measure correctly.

Measurement Process for Type A Assemblies

For the test step, connect the DUT between the launch cable and the large core receive cable.

Figure 3: Measurement setup. The DUT is mated to the launch and receive cords using Type A mating adapters.

To measure side B, flip the cable.

Figure 4: For side B measurement, simply flip the DUT.

Because a multichannel OPM is used with a fanout cable, the polarity is verified to be type A. A different mapping would result in “dark” values. The test setup as described above verifies a one-to-one mapping only.

A “deshuffle” cable can be used to test assemblies of a different polarity than type A. A deshuffle cable is a cable that inverses the polarity change that occurs through the DUT and restores type A polarity through the receive cable. This inversion restores the light path established during referencing in order to measure loss properly. Without this cable, a non-type A cable routes light to the wrong OPM channels, leading to dark power readings.

Figure 5: A 62.5um deshuffle cable is used to restore the polarity of the light path to type A when testing a 50um non-type A DUT.

In this test setup, side A of the DUT is still the connection that is being tested. Using large fiber cores for the deshuffle and receive cables maintains the zero loss connections in the later half of the setup. To test side B, the DUT must be flipped.

The same principles used to test the 50um DUT can also be applied to a single mode system. For a 9um single mode DUT, 50um multimode deshuffle and receive cables are appropriate for the large core setup. Note that single mode MPO assemblies typically have angled connectors while multimode assemblies have flat connectors, so an angled MPO connector is needed to mate to the DUT.

Figure 6: The test setup for a non-type A single mode assembly. The deshuffle and receive cables

are 50um multimode and side A of the deshuffle cable has an angled connector.

Note that for any polarity, even non-standard polarities, a cable of the same polarity can act as a deshuffle to re-route the links to the proper channels for the optical power to be measured correctly. For this method, it is imperative that only type A mating adapters be used. Any other type of mating adapter will switch the polarity of the setup and lead to confusing and incorrect results. 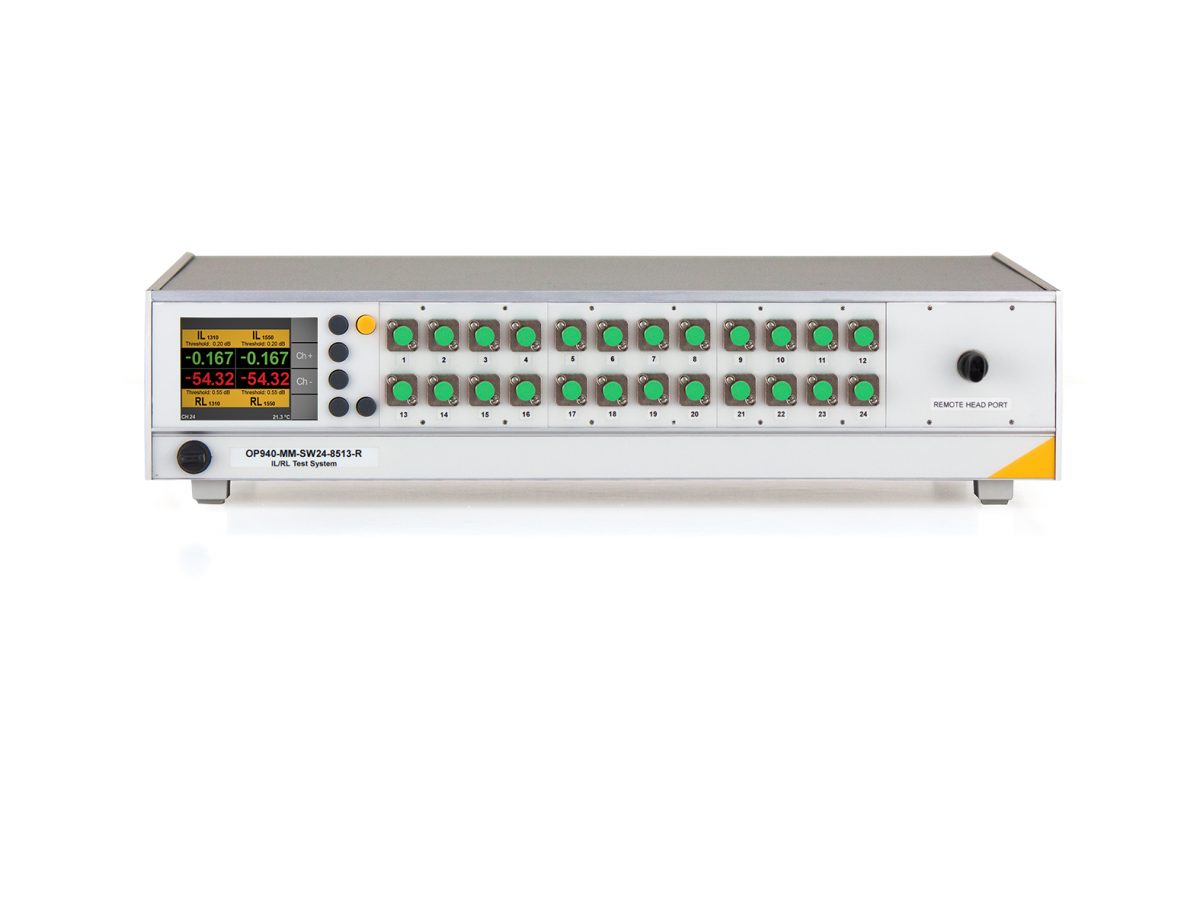 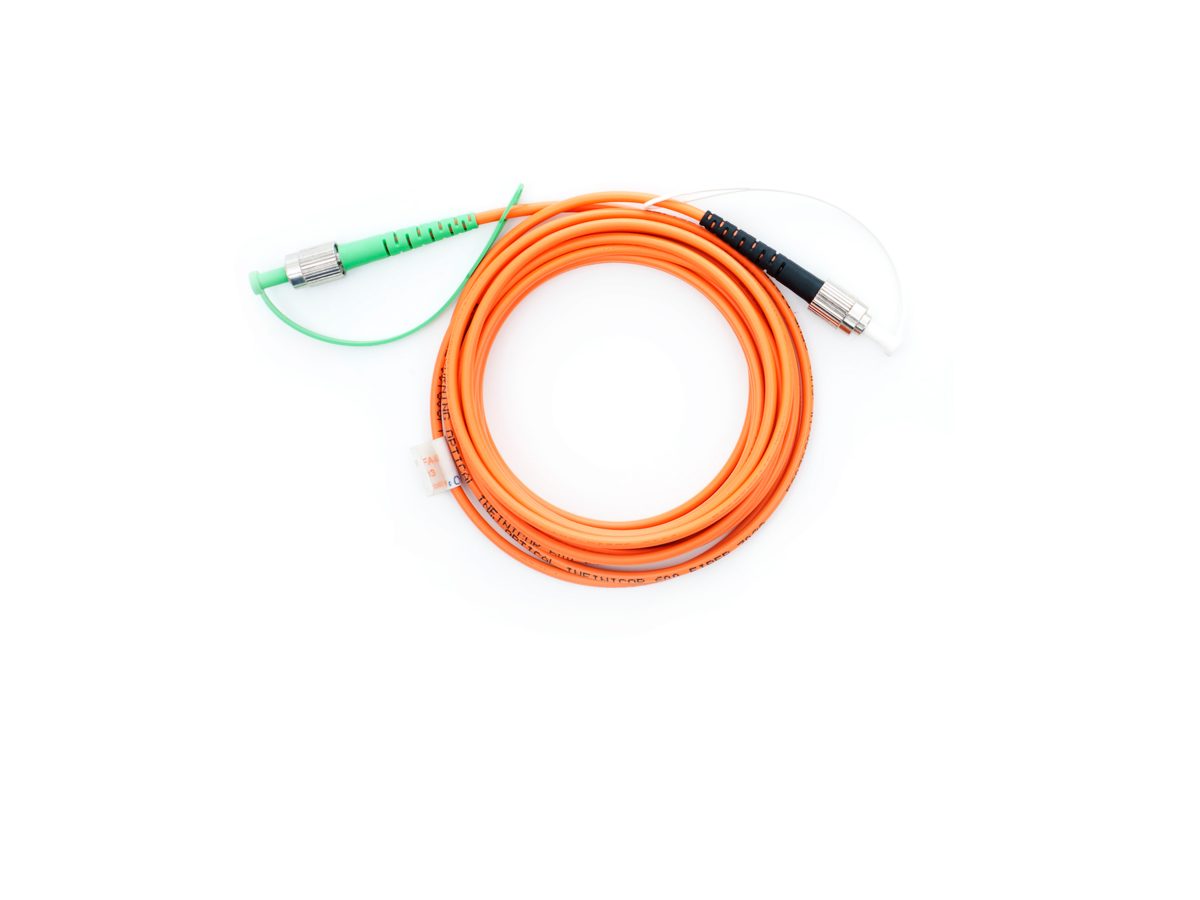 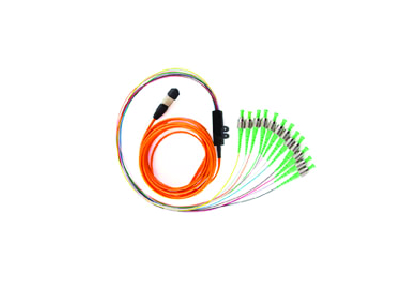