The standardization of wide band multimode fiber leads to allocating a color designation similar to the OM2 orange or OM3/OM4 aqua.  The widely accepted color within the Telecommunications Industry Association (TIA) has been lime green for the OM5 cable jacketing.  However, it has been proposed that the connector for OM5 cabling should also be lime green.  On the surface this sounds fitting.

Below, you can see the lime green jacket next to the standard APC connectors. 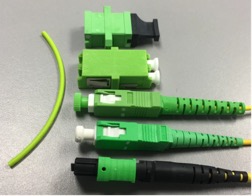 One can tell that the lime green jacket is somewhat lighter than the green APC connectors/adapters.  If the lime green cable was removed from the picture it is fathomable that a few of the objects on the right could be mistaken for lime green components.

In the most recent TIA meeting in Orlando, a concern was voiced that OM5 components and single mode APC components could be mistaken for each other given that assemblers, installers, etc. work in varying lighting conditions making some components appear lighter or darker. 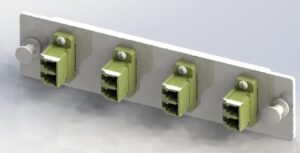 It has been proposed that the connector housings have a suggested color of white.  However, in preparation for production and deployment, companies have already started to build and in some cases install OM5 cabling with the lime green cabling and connectors.  For these companies, changing the proposed color from lime to another color would mean that they have installed cabling that does not follow the suggested color scheme within the standard.